This year marks the 20th anniversary of the Empty Bowls event.  As a major fundraiser for the Food Bank, Empty Bowls raises awareness by reminding us that thousands of our neighbors face empty bowls on their tables throughout the year. For the price of one ticket to Empty Bowls, guests will help the Food Bank provide over $250 worth of food to serve hope to families in need in our community.  To mark this momentous anniversary, this year’s Empty Bowls will feature a VIP Artist Reception, live auction clay throwing demonstrations, and a special program from Food Bank CEO, Amy Pezzani. Local notable artists will be performing in clay throwing demonstrations and donating original artwork to the silent auction. Artists include:

END_OF_DOCUMENT_TOKEN_TO_BE_REPLACED 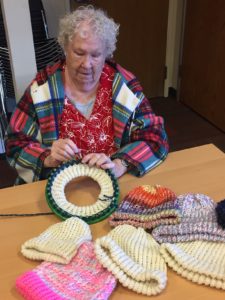 Eighty year old Bobbie is a retired nurse. She spent 30 years of her career in long-term senior care. Four years ago, after the death of her mother, who was an avid knitter, Bobbie inherited “drawers and bags” of yarn. She wasn’t sure what to do with it all and that’s when her friend Vicki suggested she start making hats to honor her mother’s memory. Bobbie loved the idea and together that year they knitted 200 hats and donated them to Coats for Colorado.

Around that same time, Bobbie started using the Food Bank. Due to a series of circumstances, Bobbie had lost her home and moved to a small apartment.  She was finding it harder and harder to make ends meet on her Social Security income. Vicki suggested she use the Food Bank.

“I remember the first time I visited, everyone was so friendly and welcoming,” said Bobbie. “I felt at home the minute I walked in.”

That’s when Bobbie decided to start donating hats to the Food Bank. Together with her friend Vicki, they knitted hats and dropped them off during their weekly visits. They made hats in a variety of colors and sizes. She was especially happy when she had blue and orange yarn to be able to make Broncos hats!  In 2015, Vicki died suddenly after a short illness. Bobbie says that she now makes her hats in honor of both her mother and her dear friend. She estimates that she’s donated over 1,000 hats over the last few years. Although she ran out of her mother’s yarn years ago, word has spread and Bobbie receives donated yarn from a variety of sources. She also stops by resale shops to find deals. Bobbie has never considered selling her hats.

“My life isn’t easy, but I have a roof over my head, food and family,” said Bobbie. “I know there are people at the Food Bank who have it worse than me. Knowing that my hats keep people warm makes me happy.”

In the simplest terms, Josh Greene is responsible for getting food for the Food Bank for Larimer County to provide to families, children, and seniors in need in our community, but his role is anything but simple.

Greene grew up in Fort Collins, attending Poudre High School, and when he decided to settle down and start a family he headed back home; he now has three children and loves living here. Josh says he got into this career by accident.

He worked in audio production, drove a truck, and then began managing a local food distribution company’s logistics and operations. When he saw a job posting for a similar role at the Food Bank for Larimer County he knew it was a perfect match of his skills and passion. At the Food Bank, Josh is the Food Resource Manager, in charge of all sourcing and transportation of food. He spends his day working to determine what the Food Bank needs, finding available food from retail partners, local farmers, and other organizations, and managing the logistics of getting it in house.

Josh navigates partnerships with Feeding America, local retailers, and farmers, to source donated food that the Food Bank, in turn, distributes to people in need. While the food is donated, the Food Bank does have to pay transportation fees and other associated costs. However, Josh works hard to keep costs low, in fact, on average, the Food Bank pays less than $0.15 per pound for the food it distributes. Last year, the Food Bank distributed more than 9 million pounds of food through its hunger-relief programs. More than 3 million pounds of that food came from retail donors within Larimer County. An additional 25% of food was sourced from local Colorado agricultural producers and the remainder was acquired from national partnerships based on availability. Last year, the Food Bank served more than 36,000 individuals.

When asked about his favorite part of his job, Josh said, “I like food system development. I thoroughly enjoy being a part of building a strong local food economy, working to reclaim waste and make food accessible to everyone.”

He wishes people better understood the scale at which the Food Bank operates. “There is a misconception that we are operating out of a garage and only distributing at church pantries, but it’s more than that. If people understood the scale, they would understand the need.”

Josh relayed a story of one Food Share client saying to him, “Thank you for feeding me today.” That sentiment has stuck with him to this day and he comes to work every day intending to do just that.

Watch this short video of Josh detailing the scale at which the Food Bank for Larimer County operates.

Due to weather conditions, the Food Bank will open at 10 am today, January 5, 2017, including Loveland Food Share. Fort Collins Food Share will operate on a normal schedule (1 – 6 pm).