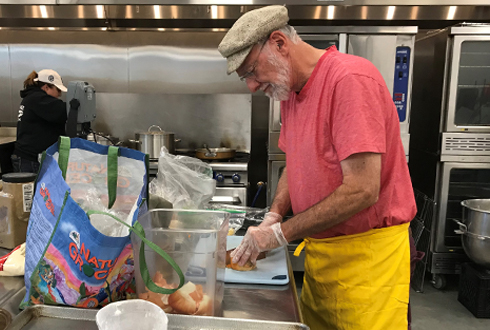 If you are Tom Wilburton, one of our talented kitchen volunteers, you choose to spend some of your time cooking meals for Food Bank employees. For him, preparing a meal for staff is a labor of love.

Tom’s journey to the Food Bank is an interesting one, filled with good friends and good food. Born in New York City, Tom discovered a love of food early in life when he and his family would eat out in the city. “Being in New York, you had some of the world’s best chefs,” Tom said. “That’s where my love of food first began.”

After a career in the insurance business, Tom’s love of food led him to Catholic Charities, where he was the kitchen manager for some 20 years. “It’s funny, back then I used to tell the Food Bank I was their #1 customer,” Tom said.

When he wasn’t busy cooking in the kitchen or shopping at the Food Bank, Tom was looking at ways to raise money for Catholic Charities. “We would make pepperoni bread, chocolate chip cookies and hermit bars and sell them,” he said. “In some months we would raise thousands of dollars.”

So, what led Tom to the Food Bank? “It was just time to give back,” he said. “I was good friends with then Food Bank volunteer manager Kevin Lovett. After he passed away, I decided it was time and the Food Bank was the place.”

Recently, Tom decided to say thank you in his own unique way by preparing the occasional lunch for Food Bank staff. These are not your typical lunches at the Food Bank. For one of his most recent creations Tom served shrimp risotto, black bean soup and pepperoni bread. He even made a vegetarian risotto for those so inclined.

“I have fun in the kitchen. The volunteers and kitchen staff are great,” Tom said. “A main reason I volunteer here is the staff. Everyone here could make more money working somewhere else, but they choose to work here. I am happy to make them lunch once in a while.”

The staff at the Food Bank really appreciate Tom’s gesture. And let’s be honest, they really like they food, too. “Tom is a great human being,” said Nutritious Kitchen manager Rhonda Niccoli. “I really enjoy seeing him on Thursdays!”

We asked you to be the difference on Colorado Gives Day and you came through in a big way. The annual statewide day of giving that encourages residents to Give Where You Live allowed the Food Bank to receive $128,000 in donations!

When we all share love, we all win. That statement is at the core of Subaru’s Share the Love event, happening now through January 2, 2019. The Share the Love event is a partnership between Subaru of America and its network of retailers where a $250 donation is made to select charities every time a new Subaru is leased or purchased.

Over the last 10 years, through the Share the Love Event, Subaru of America and its participating retailers have donated more than $118 million to charity, with customers choosing between four national and over 1,170 local charities. With this year’s event, Subaru is on track to increase that total to more than $140 million, proving there’s no limit to the amount of love we can all share.

So, if you are in the market for a new car, there’s never been a better time. Get a great vehicle and support a great cause during Subaru’s Share the Love event. Visit Dellenbach Subaru between now and January 2, 2019, to participate.

Want to know more about the Share the Love event? Visit Dellenbach Subaru for more details.

A BIG thank you to everyone who took the time to purchase a turkey – and in some cases, many turkeys – and drop them off at the Food Bank’s Inaugural Stuff the Truck Thanksgiving Turkey Drive. In all, we collected 446 frozen turkeys that will go to our neighbors in need so they can enjoy a traditional holiday meal this Thanksgiving.

So far this holiday season, including the turkeys donated at Stuff the Truck, the Food Bank has received more than 2,300 turkeys (thank you!). But we still need your help. If you weren’t able to make to the Stuff the Truck event, you still have plenty of time to make a difference this holiday season. Consider dropping off holiday food items – including frozen turkeys – to any of our three Food Bank locations:

And thank you as well to the team from Pediatric Dentistry of the Rockies who spent several hours at the Stuff the Truck event directing traffic and happily accepting the turkeys. Our volunteers are the best! 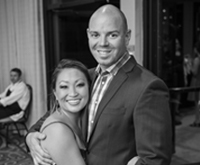 The Food Bank is fortunate to have some of the best volunteers around. Many may not realize that those who serve on our Board of Directors do so in a volunteer capacity. In the coming months we will feature members of our board so you can get to know those who are helping the Food Bank serve those in need. This month we are featuring Ty Fulcher, owner of Social and Union Bar and Soda Fountain.

What makes our mission meaningful to you?
Being in the hospitality and restaurant industry, food has always been a very big focus and passion in my life. Knowing that there are people in our community who struggle to be able to attain necessary food is heartbreaking. Our businesses have always been big supporters of the Food Bank, and to have the opportunity to work on the board is an honor.

What do you like to do in your spare time?
What spare time? :) When I’m not in work mode, I can normally be found with my family – my wife Emilee and I have a 4-year-old son named Tristan – or on my bike.

Do you volunteer or serve on other committees/boards in the community?
I recently joined the board and executive committee for the Downtown Business Association which is focused on supporting Old Town and helping it prosper.

Where are you from?
I was born and raised in Gig Harbor, Washington. I moved to Fort Collins for CSU in 2002.

Do you have pets?
Nope, just a 4-year-old son. That’s enough… 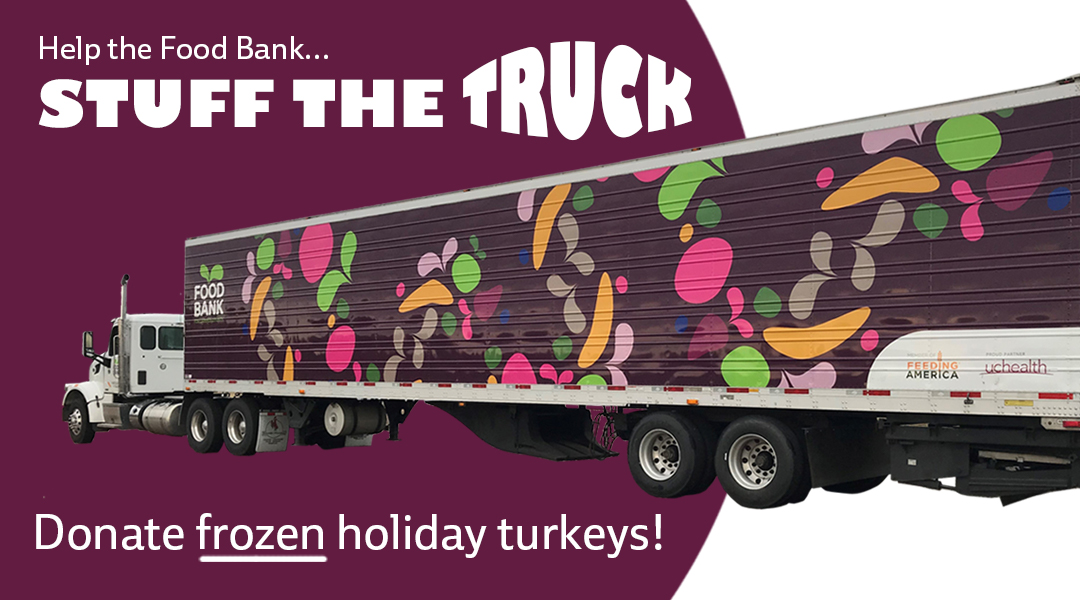 The Food Bank for Larimer County is gearing up for our busiest season of the year with the holidays, colder weather, and increased need for food in our community. It will take us all to address hunger in our community and make the holiday season vibrant for everyone. But, we need your help! Consider joining us for one (or all!) of these activities:

Thank you in advance for helping make this holiday season a little brighter for our neighbors in need.