It started with one student and a two-page proposal for a canned food drive. From there, another student built on the idea. Their actions set the course for the Colorado State University tradition known as Cans Around the Oval. 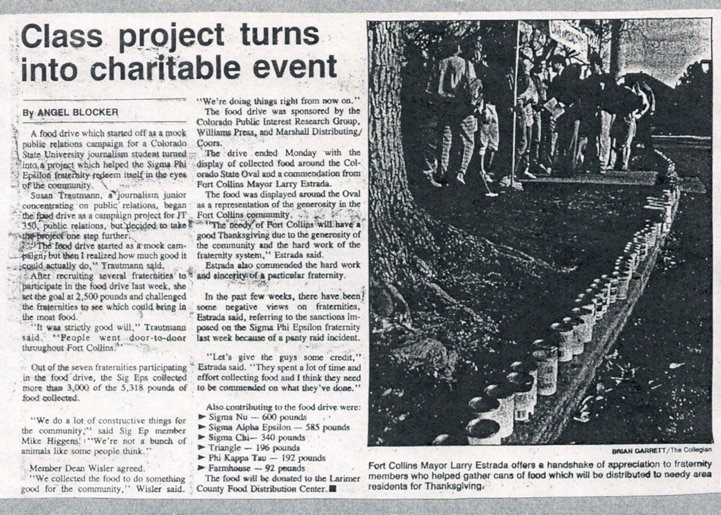 In 1987, journalism student Susan Trautman created a plan for a food drive for one of her classes. After completing the paper, she decided to execute. Following,  she contacted Food Bank for Larimer County’s Director, Sandy Bowden. Bowden loved the idea and even suggested the name “Cans Around the Oval.” In the following weeks, Trautman recruited six fraternities and challenged them to compete to see which group could collect the most cans. Her goal was 2,500 pounds.  The six fraternities spent one-week canvassing neighborhoods to ask for donations.  At the end of the week, they had collected 5,318 pounds of food! Members of the fraternities and other organizers lined the oval with the cans to celebrate the generosity of the community.

In 1988, graduate student Victoria Keller was hired to oversee the efforts of the Office of Community Services  (OCS) at CSU. She remembered reading about the Cans Around the Oval proposal and had worked with Sandy Bowden in the past.  She decided the project fit well with the goals of OCS.  That year, the participant list expanded beyond fraternities and Cans Around the Oval collected nearly 11,000 pounds of food for the Food Bank for Larimer County. After graduation, Victoria joined the staff of OCS and successfully lead the growth of Cans Around the Oval for nearly 15 years.

Cans Around the Oval started with one student who wanted to make a difference. Thirty years later, over 16,000 people from the CSU campus and the local community continue the tradition. Moreover, Cans Around the Oval has become integral to raising hunger awareness and providing resources to fight hunger in our community. An idea sparked by a class assignment has now become part of the University’s history and a huge benefit to the overall well-being of Larimcr County.

Learn more about this year’s Cans Around the Oval.

The Old Table
Scroll to top