Client Stories: In Their Own Words - Food Bank 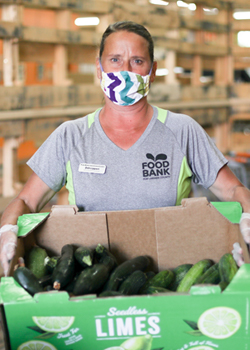 A long time Food Bank client had been battling for his life for the last year. When I first started at the Food Bank, I would sometimes get yelled at for taking too long to check clients in. This client would always come up to me and smile and give me words of encouragement to help me through some of these tough times.

This same client was always the first one to help someone lift a heavy object at the pantry or help a new client learn the ropes.

When he got sick, one of the few outings he insisted on was visiting the Food Share pantry. His wife would bring him in and there were times when he could barely make it through the process. But it was such an important social part of his life. When COVID hit, it was another hardship to bear as coming to the Food Bank was no longer an option. The man’s wife had a dilemma: She couldn’t leave him alone or expose herself to others, so how was she to get food? We talked about the Food Bank’s new homebound delivery service in partnership with CSU and it was a perfect fit.

As time progressed, the client’s condition worsened. Things were coming to an end. So, the husband and wife removed themselves from the delivery list but asked me to bring their senior boxes and some protein drinks.

As I was loading my vehicle at the pantry, I saw a bag of dog food. The couple have four dogs, so I grabbed the bag in hopes it might be of some help. When I got to their place, I told the wife about the dog food. They feed their dogs a specialty diet and the bag I brought just happened to be the exact kind they feed their dogs. Sadly, she said that one of her dogs was sick and near death. Grief on top of grief. We stood there stunned and then we were overcome with emotions.

On this final meeting I was able to say goodbye and thank the client for all of the times he lifted me up at the Food Bank. This gentleman, my friend, passed away last Tuesday.

Sometimes things happen for a reason. Perhaps it’s fate or just good people finding one another at just the right time and place. Listen to this touching audio story as Food Bank for Larimer County Kitchen Manager Rhonda Niccoli shares a chance encounter with a stranger that has had a lasting impact.

Food Bank volunteer Evelyn with the infamous bag of Cheetos.

This is not your typical Food Bank client story. But perhaps it should be. This story begins in 2019 when a woman named Diana experienced what so many of our clients experience: life.

At the age of 53, Diana was diagnosed with an immune disease that caused her fatigue, joint pain and required nearly constant medical care. Between medical costs, rent and the rest of life’s necessities, money became an issue and Diana found herself at the Food Bank.

“Turning my car into the parking lot of the Food Bank in Loveland had not been part of my plan,” Diana says. “I went in and explained my situation to the man at the counter. He grew thoughtful. I thought like everyone else, they too, would turn me away. That did not happen.”

Since that day in October of last year, Diana says she has been “receiving more than I could ever have asked for.” An unexpected gift she received was friendship from one of the Food Bank’s long-time volunteers, Evelyn.

Their friendship started in the most random of ways. Because Diana lives alone, she doesn’t like to take large quantities of food – just enough for what she needs. One day, she approached Evelyn and asked if there were any small bags of Cheetos. “I told her no Cheetos today,” Evelyn says. “The next time Diana came in I asked her what she was going to harass me about today and that’s how it all started, leading to a wonderful friendship.”

The Cheetos “incident” has since become a running joke at the Loveland Food Share. For Diana and Evelyn however, their friendship is no joke. “There are some people who just walk into your life and make a difference,” Diana says.

COVID-19 has been a challenge for many Food Bank clients, including Diana. The social aspect of coming to the pantry and seeing friendly faces has been replaced by a drive-through food distribution process designed to keep all involved safe.

“I got used to the drive-through process, but I missed seeing the others who worked inside – most of all Evelyn,” Diana says. “Recently, Evelyn waited past her normal shift time hoping to see me. When I pulled up, we virtually hugged from 10 feet away. It was a magical moment for me.”

Diana continues to visit the Food Bank during the pandemic and Evelyn continues to be one of the Food Bank’s most dedicated volunteers. Like so many of us, they are both making the best of this COVID-19 world.

“I thank the day Diana walked into the Food Bank and asked if I had a smaller sweet for her because she lives alone,” Evelyn says. “To this day she is not alone. I carry her in my thoughts every day.”

How to Take Action in September for Hunger Action Month